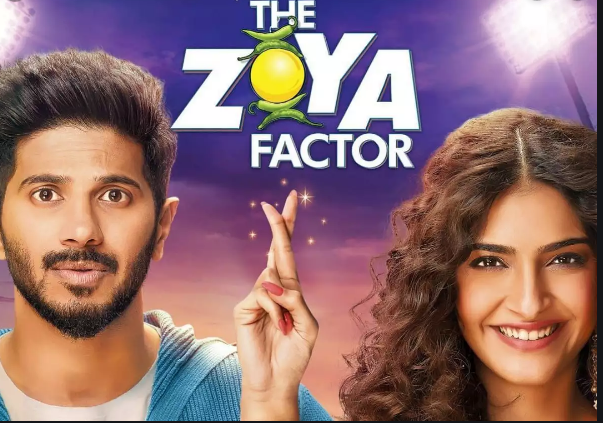 The Zoya Factor Movie Review: Sonam Kapoor and Dulquer Salmaan film is a no sixer

The Zoya Factor stars Sonam Kapoor and Dulquer Salmaan in the lead roles. The film, which is based on Anuja Chauhan’s book of the same name, is directed by Abhishek Sharma.

“With a little bit of luck, you can run amok!” Strangely, these lyrics from Audrey Hepburn’s My Fair Lady come to mind when watching The Zoya Factor, starring Sonam Kapoor and Dulquer Salmaan. And indeed, rather than putting its cast and breezy premise to good use, the film runs amok and you slowly begin to wonder why you should sit through 2.5 hours of this.

Based on Anuja Chauhan’s book, The Zoya Factor, the film directed by Abhishek Sharma chronicles the story of Zoya Solanki, your seemingly average girl who lives in a “middle-class” palatial home that has two storeys and includes a massive terrace and a garden. In Sonam’s attempt to break the fourth wall, she constantly talks to the camera in practically every shot for exposition, which just makes you wish that she could get a friend. She is believed to be lucky for cricket, as she was born the day India won the World Cup in 1983, or so her father believes.

Sadly, this luck has not translated into her life, as her boyfriend dumps her and her boss, played by Koel Purie, is less than impressed with her.

However, her luck changes when she is sent to shoot an ad with the Indian cricket team. The team discovers that Zoya is their lucky mascot and are more than excited to have her around for their matches. Nikhil is less than pleased. Unfortunately, destiny has something else in store for him too.

Things don’t go as planned (do they ever), as there are of course, corrupt villains on the prowl, including Angad Bedi. The villains are rather one-dimensional and go for the usual Bollywood-esque method of exposing their villainy.

Going by the trailers and the posters, Abhishek Sharma-directed The Zoya Factor seemed like a lighthearted and breezy story. Sadly, it’s a rather bland and dreary film that stretches on for ages, peppered with some memorable moments here and there, particularly the ones with Zoya and her family and the commentary during a cricket match. Those dialogue exchanges between Zoya and her brother Zorawar (Sikander Kher), as well as her father (Sanjay Kapoor) are good fun, and you almost begin to look forward to them as the film plateaus.

Sonam channels her Khoobsoorat character Millie, with a touch of I Hate Luv Story’s Simran to try and put together Zoya. Dulquer Salmaan works hard to save the show, but his luck wears thin by the second half. The chemistry between the leads is commendable, but not enough to carry the film through. The songs are not unforgettable either. Under the ruse of the lead character being in an advertising agency, there is enough and more product placement, to the extent there is a full commercial for Nerolac.

Manoj Lobo’s cinematography and Utsav Bhagat’s editing works fine. Shankar-Ehsaan-Loy fail to impress in the music department. Barring ‘Kaash’, none of the other tracks stay with you. Strangely while the film is titled ‘The Zoya Factor’, it’s the ‘Dulquer Salmaan’ factor which works in its favour. If you are looking out for some easy, breezy watch, this Dulquer-Sonam starrer could be your pick for this weekend..

The Zoya Factor is disappointing, as there was a lot more that could have been done with it. It could have been more entertaining and crisp, or even a wholesome romantic comedy. In the end, it just feels like a lot of watery Maggi without masala.

EXCLUSIVE: Tara Sutaria would love to approach Hollywood sooner – “I don’t want to regret it much later”