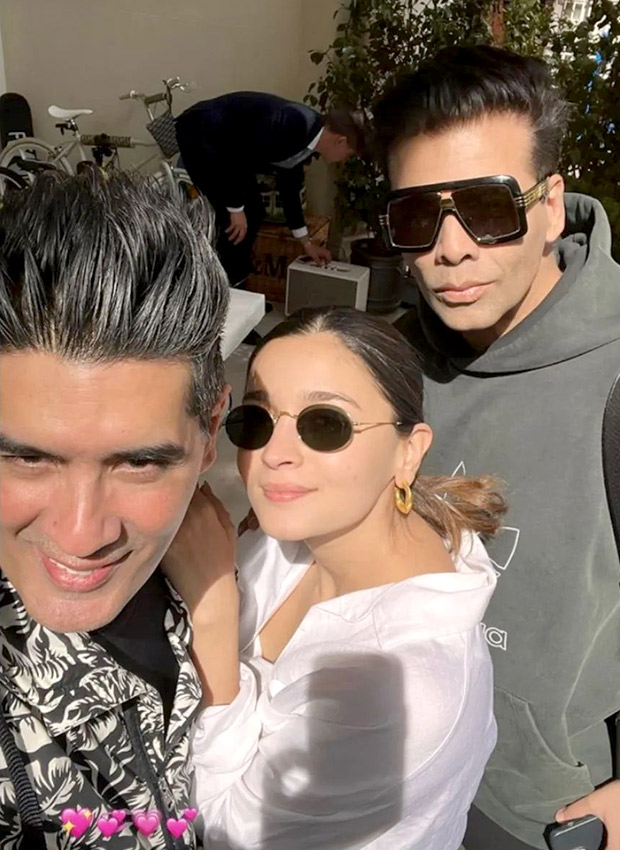 By now, readers would be aware that sisters-in-law Kareena Kapoor Khan and Alia Bhatt in London. While Kareena has been spending some time off from her work and enjoying with Saif Ali Khan and her kids, Alia Bhatt is busy with the shoot of her Hollywood debut Heart of Stone. However, the latter is currently in news after she announced her pregnancy. It seems that her mentor Karan Johar, who was thrilled to hear the news, couldn’t wait any longer and took off to London to meet Alia. On the other hand, designer Manish Malhotra, who is in the England capital for work, decided to catch up with the duo as well as Kareena.

Just earlier today, we had reported that Kareena Kapoor Khan met up with her friends in London, from Kunal Nayyar to Manish Malhotra. The fashion designer took to Instagram to share a photo with Kareena and later also shared another photo featuring the mom-to-be Alia Bhatt and Karan Johar. Interestingly, this is the first photo of Alia after she announced her pregnancy on Instagram. Needless to say, the glowing mother is looking forward for a new phase of her life.

Alia Bhatt and Ranbir Kapoor, who tied the knot on April 14, shared the arrival of their baby followed by which everyone including Karan Johar had expressed their happiness, saying, “To me, Alia is equal to my twins Roohi and Yash. The twins know Alia as their elder sister. Now they know that there is going to be an addition in the family,” says Karan.”

After announcing their pregnancy, wishes started pouring in for the mother-to-be. She, earlier, took to Instagram, to thank her fans, family and well-wishers saying, “Overwhelmed with all the love! Have tried to read everyone’s messages and good wishes and all I want to say is, it truly feels so special to celebrate such a big moment in our lives with all your love and blessings! Thank you to every single one of you.”