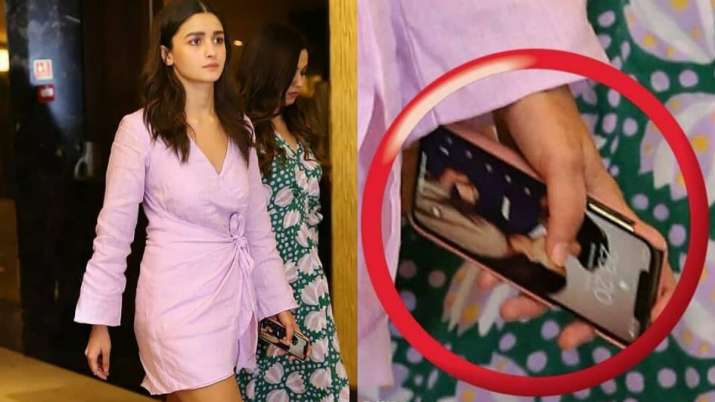 Alia Bhatt, during the special screening of Guilty, captured attention with her phone’s wallpaper that had a photo of her kissing boyfriend Ranbir Kapoor. How adorable!

When are Alia Bhatt and Ranbir Kapoor getting married– is the question that is on the lips of every Bollywood buff. The two have been giving us major couple goals and yet again they did the same when a video of Raazi actress went viral on social media. The same

was shot by the paparazzi during the special screening of Guilty where she had come to support her BFF, Akansha Ranjan Kapoor, who is also a part of the film along with Kiara Advani. What caught everyone’s attention was Alia’s wallpaper on her phone that had a photo of her kissing her boyfriend Ranbir. Adorable! Isn’t it?

Alia appeared at the scene with her mother and sister Soni Razdan and Shaheen Bhatt respectively. While the trio posed for the camera, the light of her phone turned on and there we caught the glimpse of her wallpaper that shows the couple’s photo. It seems as if it was taken during Ranbir’s cousin Armaan Jain’s wedding reception when he wore a blue attire while Alia was seen in a light-coloured outfit.

Rhea Chakraborty remembers Sushant Singh Rajput with heartfelt note: I will wait for you my shooting star

Vidya Balan: There Are Enough Kabir Singhs In The World, I Am Okay With That

Neha Kakkar reveals that singers do not get...

THROWBACK: When Tiger Shroff spoke about his dream...