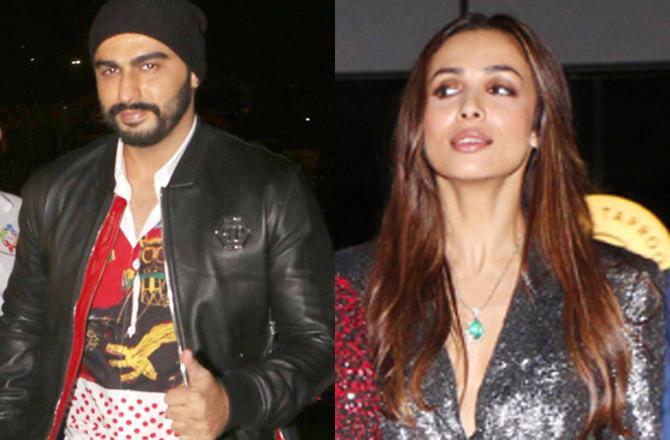 On Wednesday, Arjun Kapoor shared an interesting picture on Instagram. His post had a picture of him standing against a backdrop, a glass door probably, having an interesting quote in neon lights that read – “Wake up. Kick ass. Be Kind. Repeat.”

As soon as Arjun shared this post, it was his rumoured ladylove, Malaika Arora, who commented on his picture and wrote: “YAS!!!! [sic]”

Not just Malaika Arora but Boney Kapoor and the late Sridevi’s daughter, Janhvi Kapoor also shared her opinion on Arjun Kapoor’s post. She wrote, “Love this.”

Well, this isn’t the first time that Malaika has commented on Arjun’s Instagram posts. They often drop comments such as “hmmm” on each other’s posts. Do you think ‘hmm’ could be their secret code word for something else? Whatever it is, the fans are loving their pair. While some share comments full of hatred, there are many who think there’s nothing wrong in dating an elderly woman or a younger man.

Talking about Malaika and Arjun, the two were recently spotted partying with Kareena Kapoor Khan and Saif Ali Khan. They all looked happy in each other’s company and also smiled at the shutterbugs.

There were also wedding rumours of the two for the past few months, and talking about it, Arjun Kapoor said in an interview that he would not want to get married when he is bald! “Usually, men lose hair after getting married and not before (laughs). To put things in perspective, as an actor, why would I want to get married when I am sporting a bald look? There would be pictures of it everywhere! On a serious note, I am not getting married. I have not hidden anything from anyone and I think my personal life deserves respect and dignity for that,” said the Ishaqzaade actor.

On the professional front, Arjun is awaiting the release of India’s Most Wanted, followed by Sandeep Aur Pinky Faraar with Parineeti Chopra and Panipat with Kriti Sanon, which also features Sanjay Dutt.

Watch video: Here’s how Farhan Akhtar is gearing up for Toofan

Abhishek Bachchan does not believe in the term ‘pan-India’ films; says it is not fair to label any industry

EXCLUSIVE: Rashami Desai REACTS on being compared with...

Kartik Aaryan shares an illustration, says ‘even the...

Sunny Leone sets the internet on fire with...