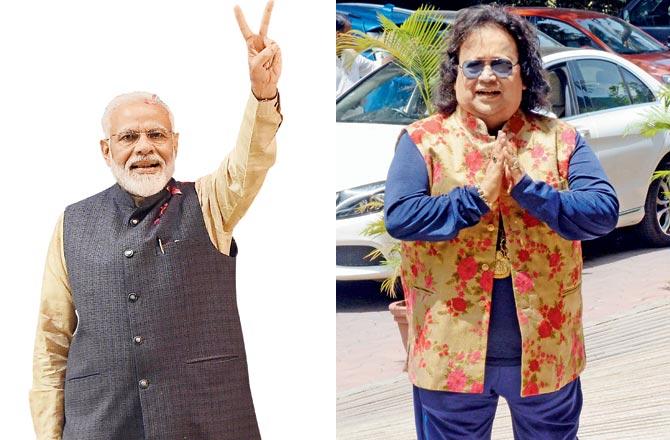 Unable to release his hail-NaMo song during elections, Bappi Lahiri gifts it to PM following win

Even as Prime Minister Narendra Modi’s supporters continue to celebrate his landslide victory in the Lok Sabha elections, composer Bappi Lahiri has a special gift for the charismatic leader. Turns out, the singer-composer had created a single in March — titled Modi ji hai, Modi ji rahenge — hoping that the political party use the track for their rallies. While that was not to be, the makers could not release the song thereafter as it violated the Model Code of Conduct. Now, with the elections behind them, the composer has sent the track to Modi as a congratulatory wish.

Bhavesh Tanna, one of the producers of the song, says, “As per the Election Commission’s rules, the BJP media cell can only give five songs to media [including TV channels] for promotion. Our song was not selected as we could not submit it to them on time.” The six-minute track is a propaganda piece that hails the leader and his various programmes, including Swacch Bharat Abhiyan and Beti Bachao, Beti Padhao campaign.

Talking to mid-day, Lahiri reveals that he had released the song on YouTube, on April 6, before the polling began. “Although I had launched the song on YouTube, I could not release it across channels because of the electoral rules and regulations,” he rues. However, the delay has neither affected him nor his labour of love. With renewed vigour, the composer utilised the time to shoot a new video for the song and is now planning a grand launch. “I sent the video to Modi ji on Thursday after his stupendous victory. I also plan to host an event and have the song launched by a prominent politician.”

Deepika Padukone, Sabyasachi Mukherjee and Imran Amed: Three is not a crowd

Bharat Zinda Song: It is a new anthem...

Tiger Shroff shares how he looks on his...

Devoleena Bhattacharjee says this is the fourth time...