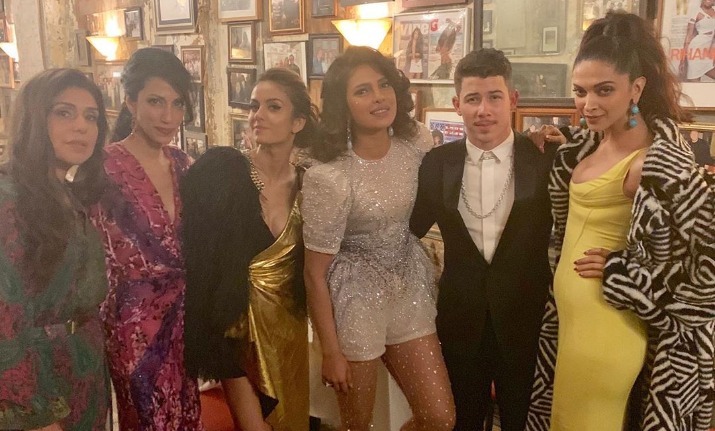 Priyanka Chopra and Deepika Padukone were seen hanging out with Nick Jonas at Met Gala 2019 after party.

Deepika Padukone and Priyanka Chopra were seen hanging out together after wrapping up the Met Gala 2019. Both of the leading ladies changed into something ‘comfortable’ for the after party. While Priyanka got rid of her frizzy hair wig, Deepika Padukone ditched her pink ruffled dress. PeeCee flaunted her real curly hair and Deepika slipped into a sunny yellow bodycon dress paired with a black and white shrug. Both of them hung out together and joined by PeeCee’s husband Nick Jonas. The Quantico actress shared a group picture on her Instagram and wrote, “Charlie and the Indian angels end the night.”

Charlie and the Indian angels end the night .. ❤️ #metgala2019

Also seen in the picture are Natasha Poonawalla, Anaita Shroff Adajania and Huma Abedin. Nick Jonas is posing between the leading ladies.

Interestingly, Deepika Padukone has repeated her shrug that she wore a couple of years ago for a film’s promotion. The actress is known for repeating her clothes like a slayer she is. Sonam Kapoor is another Bollywood actress who finds nothing wrong in repeating her outfit.

Priyanka Chopra shared another series of pictures with her husband Nick Jonas, who changed into a black tuxedo for the Met Gala 2019 after party.

Earlier, Deepika Padukone was seen in a Barbie-theme pink ruffled dress with her hair styled into an outlandish dome-shape hairstyle. She was looking gorgeous with a dark-coloured lipstick. This is Deepika’s third time at Met Gala ball.

Priyanka Chopra wore a feather-embellished dress with a mane styled into a ball of fuzz. She completed her look with a crown while her husband Nick Jonas took cues from Game of Thrones’ Lord Petyr Baelish aka Little Finger. He wore an all-white suit with a series of earrings in his left ear. Many compared Priyanka Chopra’s look to Missandei of Naath from GoT. Trolls and memes on her Met Gala 2019 look started floating on the internet, but the supercouple has no qualms about it.

Deepika Padukone and Priyanka Chopra worked together in Baajirao Mastani. The film was also Priyanka’s last film in Bollywood before stepping permanently into Hollywood. She is returning to Bollywood with Shonali Bose’s The Sky is Pink with Farhan Akhtar and Zaira Wasim. It is slated to release in October this year.

Anees Bazmee to talk about his journey of...

Kunal Kemmu: Malang has a lot of shades...