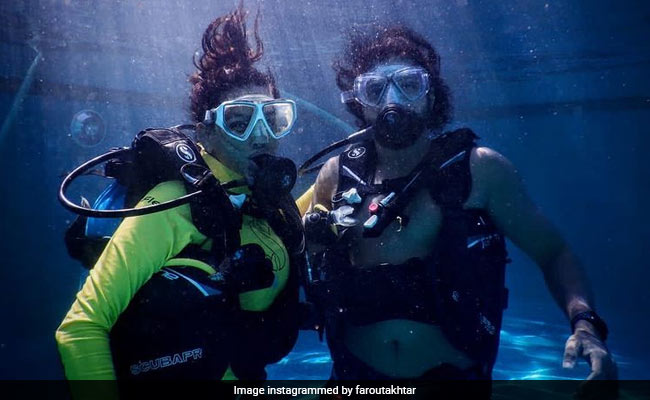 Farhan Akhtar is currently spending some quality time with wife Shibani Dandekar amidst the romantic and picturesque Maldives island. The Toofan actor, who tied the knot in February this year, were seen enjoying their vacation time and shared about it on social media. The couple shared a video of their Maldives shenanigans, where we saw them getting goofy, adventurous, and romantic during their trip.

A video shared by Farhan Akhtar, in collaboration with wife Shibani Dandekar, sees the couple sharing some glimpses from their Maldives holiday. While the video starts with them doing a goofy dance on the beach, as the video progresses we can see them jetting off on the boat to take a dive in  the middle of the sea. Gearing up with their scuba gears, we also got a sneak peek into their scuba diving experience along with the flora and fauna of the island. We can see a thrilled Shibani hugging her hubby as they even kiss underwater. The vacay video ends with Farhan signing off underwater. It was captioned saying, “???? ???? @orcadiveclub @topclasscruising #FarOutdoors #LiveBoard #Sachika #Maldives #DiveTime #Scuba #UnderWater #reelsinstagram”

Besides this, Farhan also shared a photo of the fishes which was taken when he went scuba-diving.

Farhan Akhtar and Shibani Dandekar tied the knot in a simple ceremony at the former’s family farmhouse in Khandala amidst friends and family, on February 19, 2022. The two actors have been dating since 2018 and have been quite active on social media too. On the work front, Farhan was last seen in Toofan and he has also shot for a pivotal role in the Hollywood series, Ms. Marvel which is currently streaming on Disney Plus Hotstar.