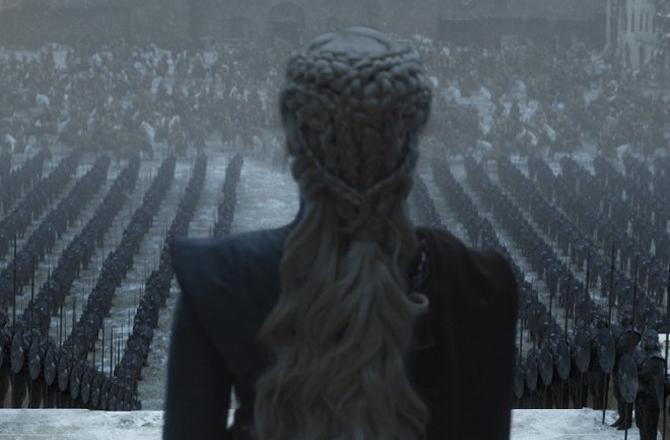 The final chapter of “Game of Thrones” came with a tragic end to a love story, betrayal, twists, death and a lot of characters’ lives coming full circle. Was it a happy ending? Well, as Ramsay Bolton once said: “If you think this has a happy ending”

Creators David Benioff and Dan Weiss took on the responsibility to direct the last episode titled ‘The Iron Throne’ to deliver a bittersweet ending of the series, which they first brought to life from George R.R. Martin’s books in 2011.

Last year, actress Nathalie Emmanuel, who essays Missandei, told IANS that the final season would conclude several stories. “The season will be incredibly satisfying, exciting and heartbreaking,” she had said. And so it was, as the makers tied together all the loose ends in the finale, which aired internationally on Sunday. It aired in India on Star World.

The makers had promised a ruler to sit on the coveted Iron Throne — and they stayed true to it. But in the end, they destroyed the throne itself, the fight for which left thousands of corpses.

Daenerys Targaryen, essayed by Emilia Clarke, fought several wars and won to get to the Iron Throne. She reached it after burning the whole town, blinded by revenge and anger, as hinted by the makers.

She was the ‘Breaker of the Chain’, ‘Khaleesi’, ‘Mother of Dragons’. But in the end, just like her ancestors, she became a mad queen. This was symbolised cleverly with a shot of a dragon’s wings behind her, signifying that she now has wings of her own.

Daenerys reached the throne, only to be killed by her lover Jon Snow before she even got a chance to sit on it. What follows is an emotional scene with her dragon Drogon nuzzling her to wake her up, and a raging fire which melts the throne that ultimately flows like lava. Drogon then flies away with his mother’s corpse.

The show started with the House of Stark. The end was also about the Starks, and how they went back on the path on which they first set foot on, in the initial seasons.

It was Sansa Stark’s dream to be a queen that led her to the Kings Landing with Joffrey. After enduring pain and struggle, she got to the throne and became the Queen of the North.

Throughout the eight-season journey of the show, Jon Snow saw lots of ups and downs as he joined Night’s Watch, became the Lord Commander, lost his first love, fought the army of the undead, came back to Winterfell, found the truth about his true lineage and claim to the Iron Throne.

In the finale also, Jon is seen fighting between his love and duty as Tyrion tells him “sometimes duty is the death of love”. He kills his woman while declaring that she will always remain his queen. He is exiled to the Night’s Watch, which makes way for an emotional reunion with his direwolf Ghost.

In the parting scene, Jon is seen walking into the forest with the Wildings along with Ghost.

What about Bran? He becomes the King of Westeros.

How? Because he had a great story. The reason behind the decision is highlighted by Tyrion: “People love great stories”.

Bran was left crippled by Jaime Lannister when he caught him in an intimate moment with his sister Cersei. He went on to become the Three-Eyed Raven, and now Bran the Broken, who will rule the six Kingdoms of Westeros. Tyrion was appointed as Hand of the King.

Cersei and Jaime’s love story came to a crashing end as they die in each others’ embrace. It was a new start for Greyworm as well as he sailed for the Island of Naath.

As for Arya, she took on a new adventure to find “What’s west of Westeros?”.

In an interview to IANS, actor Iain Glen had said the final part will feel like a conclusion, “but with something this big like ‘Game of Thrones’, you cannot please everyone”.

Sure enough, the finale left many fans heartbroken over how their ‘Watch’ ended. And some had unanswered questions: How was Sansa as a ruler? Did Jon become a Wildling? How was Bran as a king? What did Arya find? It makes one think will the show make a comeback?

Are Imran Khan and Avantika Malik taking a break from their marriage?

“Eid celebrations this year are all the more special for us with the success of KGF2” says Maanayata Dutt!

On World Wildlife Day, Raveena Tandon urges us to take charge of...