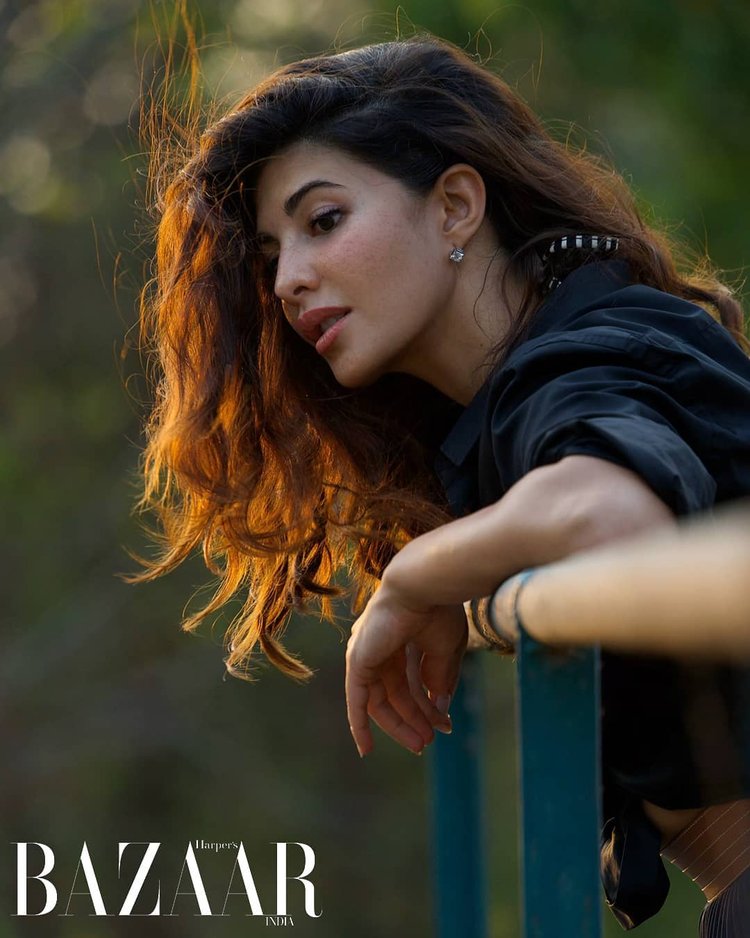 Jacqueline Fernandez’s latest cover for a leading magazine was flawless as ever but these inside images tell us, how we must reconnect with nature. What better inspiration than the actress, herself!

In the first one, we see Jacqueline playing a guitar and playing with a little goat. Jacqueline is seen wearing a beautiful dark ocean blue blazer with a bralette and a skirt. The magazine on their social media says, “Amidst news of the lockdown extension, we asked Jacqueline Fernandez to create images that would celebrate just some of the things that are bringing us joy right now—beautiful imagery, nature, and the hope of a better future. The actor is quarantined out on a Panvel farmhouse and is also currently promoting her new Netflix movie Mrs Serial Killer. She styled and did her own hair and makeup for this dreamy digital cover story. Watch this space to see more images created exclusively for Bazaar.”

The second one is the one where we’re searching for sunnier times. Jacqueline looks stunning in the beige skirt and a white single shouldered top with soft summery glowy dewy makeup. The magazine shares on their social media and says, “Dreaming of sunnier times and the great outdoors with cover star Jacqueline Fernandez”

The last look of Jacqueline with wavy hair and the blazer with sunshine on her hair enhancing the looks. The last one is a perfect picture for how we are all feeling during the quarantine, the magazine writes, “Our April/May 2020 digital issue cover star Jacqueline Fernandez shared a glimpse of what life looks like for her right now in quarantine. The actor is grateful to be quarantined out on a Panvel farmhouse where she is, “reconnecting with nature”. She says she is, “doing everything that I can to help those in need from here and praying for strength and health to each one in this world during these tough times.”

It’s amazing to see how we can totally relate to these images and mood as we are feeling it totally. Everyone is searching for hope, sunnier and happier times. Everyone is reconnecting with nature in their own way. Jacqueline is also one of those actress who wins hearts not just on magazine covers but also on-screen each time. Her recently released Mrs. Serial Killer has won hearts and the perfect portrayal of a dark character has just proved her versatility as an actress one more time

Shahid Kapoor’s heart-warming film Jersey hailed by fans and critics as his best performance ever!

BREAKING: Theatrical trailer of Ranbir Kapoor-starrer Shamshera to be released on June 24

Shweta Basu ends marriage with Rohit Mittal after a year: Not every book is to be read cover to cover