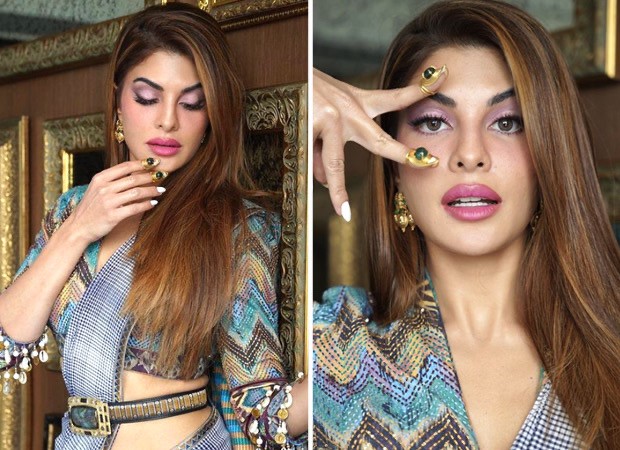 Kichcha Sudeep’s highly awaited Vikrant Rona is consistently maintaining buzz. The anticipation for the 3D mystery thriller Vikrant Rona has increased since the release of its teaser. To give the audience the perfect reward for their patience the producers have released the first song from the album ‘Ra Ra Rakkamma’, which introduces the diva Jacqueline Fernandez as Gadang Rakkamma – The Queen of Good Times.

The Kannada fantasy action-adventure thriller film Vikrant Rona, starring Jacqueline Fernandez, is almost ready for release. Together with the team, the actor is currently in Bangalore. She recently attended a film event wearing ethnic attire with a modern twist and shared photos on social media. The actor was spotted wearing a blue-purple kantha embroidered saree. The hem of the saree is embellished with coins and shell latkan. The saree is placed over a multi-colour khadi blouse with a deep neck and beaded shell detailing on the sleeves. The blouse is accentuated with sequins and has a cut out back. Her complete style was defined by the classic bronze statement belt, which made the outfit stand out. Her saree is worth Rs. 79,900 and is from Tarun Tahiliani’s line.

Jacqueline in the photos is seen flaunting her exquisite nail rings. She chose gold earrings that matched her nail rings. She went for bold makeup with bright pink eyes and pink lips. She wore her hair down and looked bright and ethereal in every shot.

The song ‘Rakkamma’ from her film has received a lot of positive response from her fans. Sharing her pictures, she captioned her post, “Rakkamma ready!!#rararakkamma #VikrantRona.

On the work front, Kichcha Sudeep and Jacqueline’s upcoming 3D action movie Vikrant Rona will hit the theatres countrywide on July 28, Jacqueline Fernandez will next star in Ram Setu, Cirkus and Kick 2.

Check out Siddhant Chaturvedi transformed into the desi...