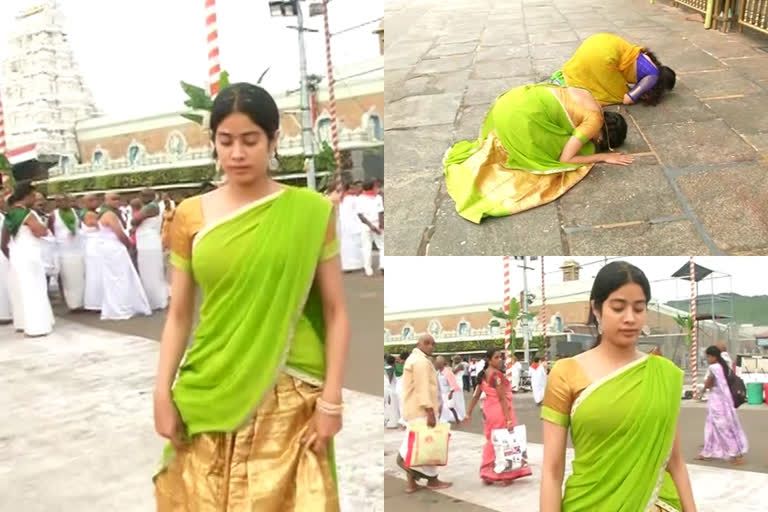 Janhvi Kapoor was recently seen visiting the Tirumala temple aka the iconic Tirupati Balaji temple in Andhra Pradesh. The actress seems to have taken a trip down to the South of India where her mother and late actress Sridevi hails from. After visiting the iconic religious shrine earlier during her late mother’s birth anniversary, Janhvi seems to have once again visited the temple to seek the blessings of the Lord Venkateswara.

From a video that has found its way online, it seems that several arrangements were made before the actress visited the temple. From security guards to clearing the path for the actress to get proper darshan, it seems that a lot of preps were done when she visited the Tirumala temple with her friends. From what we hear, the actress was recently also seen spending time in Chennai, in the lavish bungalow, which used to be one of Sridevi’s favourite places. In fact, she even shot an episode for a show, where she gave her fans a glimpse of the bungalow and also discussed about the favourite corners of the home that her entire family adores.

Readers would be aware that Sridevi was not only a superstar in Bollywood but across Indian cinema. The actress started her career with South cinema and became one of the most popular actresses in the whole of the Indian film industry and ruled the charts during the 90s. The late actress however succumbed to death after drowning in a bathtub at a hotel in Dubai, where she was attending the wedding of her relative, actor Mohit Marwah.

Coming to Janhvi Kapoor, the actress made her debut in 2018 with the film Dhadak alongside Shahid Kapoor’s younger brother Ishaan Khatter. She was last seen in Mili that is a remake of the Malayalam film Helen. The film is a survivor drama where a middle-class girl, working part time at a food chain, gets trapped in a cold storage.

Shah Rukh Khan waves to fans outside Mannat; shares selfie saying, “How lovely to meet you all on Eid”

Game of Thrones comes full circle for a final goodbye