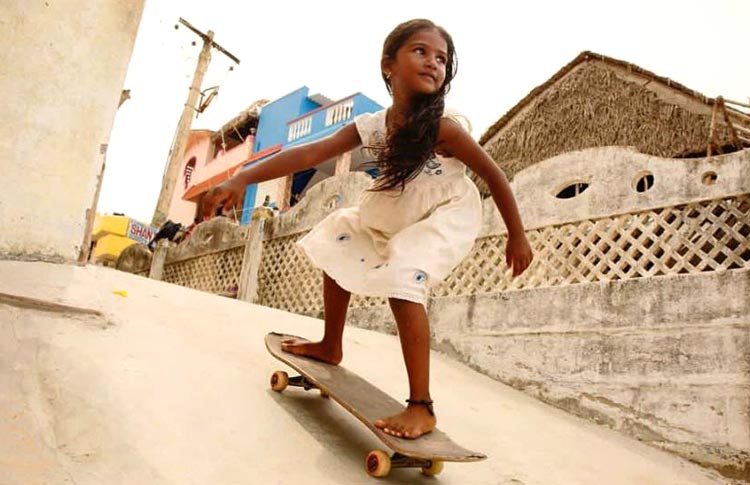 A short film on the life of a single mother in India who sells fish and raises her 9-year-old daughter as a skateboarder has won top honours at the Atlanta Film Festival, raising hopes for an Academy Award for a yet another Indian story.

“Kamali“, shot in the historic coastal town of Mahabalipuram outside Chennai, tells the story of Suganthi’s fight against all odds to raise her daughter so she would become a skateboarder. It also focuses on Kamali’s transformation after she takes up skateboarding and the hope it brings to her life.

After her marriage broke, 34-year-old Suganthi decided to educate and empower her daughter through skateboarding. It was her surfer  brother’s friend, a skateboarder himself, who gifted Kamali a skateboard that ushered a phase of gender equality at home.

Sasha Rainbow, a New Zealand-born filmmaker now settled in London, had first traveled to India to feature Kamali and other skateboarding girls for the video of a song “Alpha Female” by a UK-based band Wild Beasts.

But it was the determination, grit and vision of Kamali’s mother that fascinated Ms Rainbow, who returned to make this documentary and tell her story to the world.

“Kamali’s story represents an incredible moment in India and shows how massive change can start with just one person. I believe Kamali’s mother Suganthi and others like her are heroes who should be celebrated for her bravery. I believe skateboarding is a symbol of going against the grain, standing boldly in front of society and taking ownership of one’s life,” Ms Rainbow, the director of “Kamali“, said.

Suganthi earns her living by selling ready-to-eat masala fish along the beach and is determined to transform Kamali’s life through this sport on wheels.

Excited about the critical acclaim the film has received, Suganthi told NDTV, “My parents and the local community did not approve. They used to ask her life would be spoiled if she breaks her limbs. I want her to reach greater heights. She should not be like me with limited exposure.”

Kamali is already an internet sensation. Aine Edwards, a Chennai-based Irish entrepreneur had connected her to Jamie Thomas, a celebrated international skateboarder. A picture of the training that he posted was shared by Tony Hawk, another professional skateboarder, that went viral on social media.

Deepika Padukone will be a part of Shah Rukh Khan, Nayanthara starrer Jawan

We are a Team of IT Experts specialized in the production of authentic Documents and Counterfeit bank notes. We work with government officials, professors and professional hackers from China, US, Russia, Taiwan etc. All these documents are registered into the supposed database. Documents such as Passport, Visa’s, Driving License, Covid19 Vaccine Card, University Certificates etc. We also have Canadian dollars, US dollars, pounds and euros. We also have our money in categories, Grade A quality that works at ATMs and bypasses the fake money detector and we also have the normal stage money that was used in jokes, commercials, music and movie videos. Contact details below.
WhatsApp….. +44 7459 530545
Email Address…. jameskinds65@gmail.com
Telegram ID….. “@Jameskind65”
Wickr Me ID….. Jameskind65.

Chiranjeevi honours Kamal Haasan after the success of...