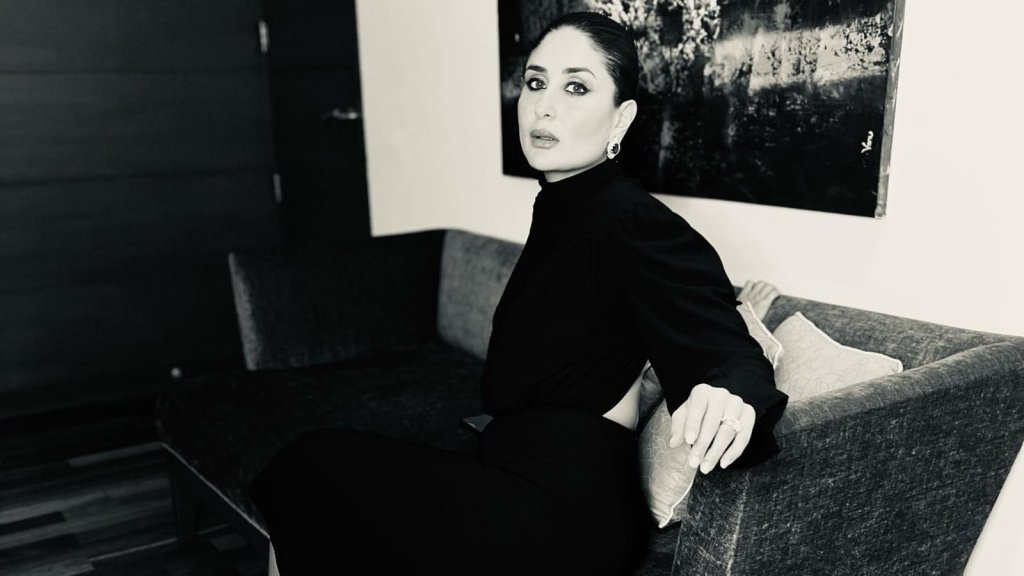 Nobody provides fashion inspiration quite like Kareena Kapoor does. She will always be remembered as everyone’s favourite feisty Poo from Kabhi Khushi Kabhi Gham, and we’re certain she still has a little of Poo within of her. She appeared to turn heads the way she did while dressed in all-black for the Indian Chamber of Commerce event, and that seems to be the only plausible explanation for it. Kareena Kapoor considers every outing to be stylish. She always travels in elegance, whether she’s going to the gym or on a trip abroad. Therefore, you can be sure that the Bollywood star’s fashion sense won’t suffer when she leaves her home. Kareena was photographed around the city wearing a simple black outfit that was perfect for any special occasion.

Kareena Kapoor Khan’s Instagram frequently provides a glimpse into her life with several notable statements and appearances. The star took on the role of spokeswoman for an Indian Chamber of Commerce event and has been posting photographs of her getting ready in workwear on social media. She was wearing a stylish black dress that was acquired from Max Mara. Her long technical sable dress has a wide-open back and a high neck with a small button closure. It also has a full gathered bodice on the front. It features a skirt that hugs the hips and eases out towards the hem. The cost of her garment is Rs. 33,166. She accessorised with edgy diamond studs. Her day’s outfit was perfectly completed by her effortlessly smeared smoky eye makeup. Her appearance was superbly completed by her black heels. Kareena Kapoor’s monochromatic wardrobe may run out of pages, but she will never stop loving it.

Meanwhile on the work front, Kareena will be seen next in Sujoy Ghosh’s thriller, which will be based on the Japanese book The Devotion of Suspect X. She will be sharing screen space with Jaideep Ahlawat and Vijay Varma in the movie. Recently, it Kareena also confirmed that she will be re-uniting for a new film with Veere Di Wedding producer Rhea Kapoor in The Crew opposite Tabu & Kriti Sanon. She has has an untitled film directed by Hansal Mehta.

BREAKING: CBFC passes Ajay Devgn’s Runway 34 and Doctor Strange: In The Multiverse Of Madness with U/A certificate and ZERO cuts