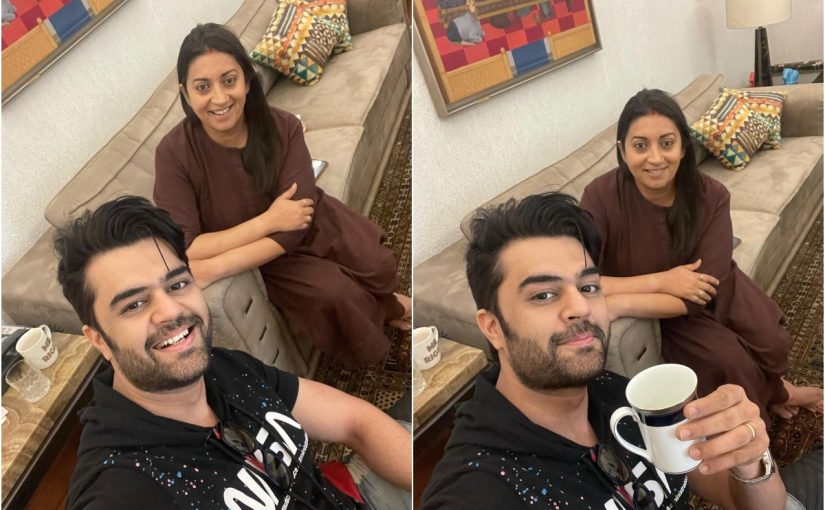 Maniesh Paul is one of the most entertaining personalities in the industry. Recently, actor-host Maniesh Paul took to his social media to share an adorable picture with actor turned politician Smriti Irani, with a fun and witty caption, as the duo met in Delhi for tea.

On Tuesday, Maniesh took to Instagram and shared a picture of him along with Smriti Irani. The duo were all smiles as Maniesh took the selfie. Sharing the picture, he captioned, “When an abhineta met a neta who was once an abhineta!! @smritiiraniofficial ma’am thank you so much for taking out time for me…always a pleasure to see you and thanks for the warmth you always showed me with????????????

Earlier last year too Maniesh Paul paid a visit to Smriti Irani, wherein the duo enjoyed cups of Kadha amidst the Covid times.

On the professional front, after enjoying accolades and love from the audience and critics alike for his entertaining and impactful performance in JugJugg Jeeyo, Maniesh Paul is currently gearing for his digital debut, featuring the actor in an all-new avatar. Maniesh Paul also regularly makes headlines for his much-loved podcast, known for unfolding interesting, untold and engaging conversations with guests from different walks of life, like Bharti Singh, Sharad Kelkar, Prajakta Koli, Anu Mallik, Krushna Abhishek, and Govinda amongst others.

You’ll appear like the most stylish wedding guest around in this blue abstract saree by Abu Jani Sandeep Khosla, worn by Jacqueline Fernandez

FIRST LOOK: Sidharth Shukla and Shehnaaz Gill look so in love in...

Sayani Gupta gets into the skin of her...

Shabana Azmi opens up about working with Steven...