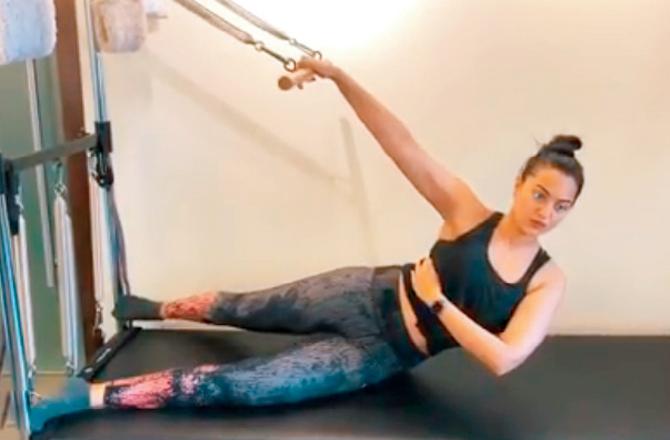 Sonakshi Sinha was busy sweating it out at the gym, while parents Shatrughan and Poonam Sinha were facing defeat at the Lok Sabha Elections 2019

While parents Shatrughan and Punam Sinha were facing defeat in their respective seats, Sonakshi Sinha was busy sweating it out at the gym. She shared a video on Instagram and wrote, “Getting back in the groove. Pilates girl. Core workouts (sic).” Sona appeared to be unperturbed by the outcome.

Shatrughan Sinha and Poonam were contesting from Patna and Lucknow, where they lost to their respective compeditors. Sonakshi Sinha also took the time off work to earlier to be part of mother Poonam Sinha’s road show, who was contesting the Lok Sabha seat as a Samajwadi Party candidate, in Lucknow. Talking about it Sonakshi said that she didn’t become a part of her mother Poonam Sinha’s rally as a celebrity, but as a daughter.

On the film front, Sonakshi Sinha is busy with several projects. She will be seen playing an astrophysicist in Mission Mangal, a small town girl in Mrigdeep Lamba’s untitled comedy, an outspoken social worker in Bhuj: The Pride of India and reprising her role of Rajjo in Dabangg 3.

In Mission Mangal, Sona will be seen with Akshay Kumar, Vidya Balan, Taapsee Pannu, Nithya Menen, Sharman Joshi among others. For Mrigdeep Lamba’s film, she will be seen with Varun Sharma. Bhuj: The Pride of India is a multi-starrer with a stellar cast of Ajay Devgn, Sanjay Dutt, Rana Daggubati, Parineeti Chopra, Ammy Virk among others. She will also reprise her role as Rajjo in part 3 of Salman Khan’s Dabangg franchise.

Kriti Sanon on five years in Bollywood: I’m on the right track

‘Panga’: Ashwiny Iyer Tiwari reveals that the entire team was like a family by the time they wrapped up

Doctor Strange in the Multiverse of Madness scene...