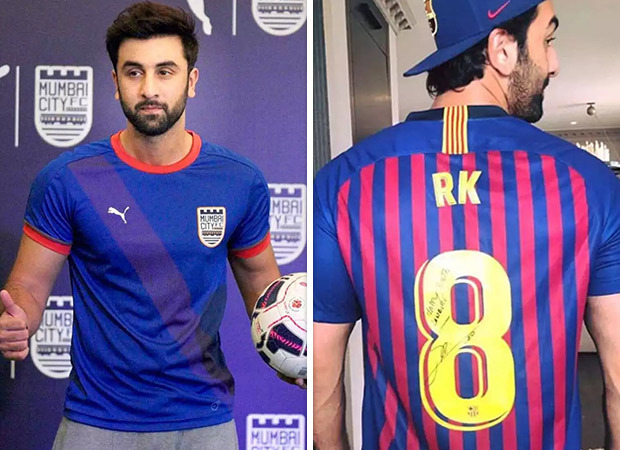 Just a day ago, Bollywood celebrities were spotted at the airport, leaving for Dubai for the All Stars Football Match. During its press conference, the team’s members like Abhishek Bachchan, Ranbir Kapoor, Kartik Aaryan amongst others were seen answering media questions. During one such moment, Ranbir Kapoor spoke about why he loves the number 8, which is incidentally, also his jersey number.

Interestingly, there was the presence of number 8 even during the wedding ceremony of Ranbir Kapoor and Alia Bhatt. The mangalsutra that Alia wore after the wedding has a infinity sign pendant in the middle. The actor considers it to be his lucky number and ensures its presence around even in his personal moments.

On the work front, Ranbir Kapoor is busy with films. He is gearing up for the release of the magnum opus Brahmastra, which is incidentally also his first film with his wife Alia Bhatt. The film, that also stars Amitabh Bachchan, Nagarjuna, Mouni Roy, is directed by Ayan Mukerji and is the first part of the Shiva trilogy series. It is slated to release on September 9, 2022.

Besides these, Ranbir Kapoor also has films like Shamshera under the Yash Raj banner and Animal, directed by Sandeep Reddy Vanga in the pipeline. The actor is also expected to feature in Luv Ranjan’s forthcoming project.

VIDEO: Shilpa Shetty and Raj Kundra funnily depict life before and after marriage

Selena Gomez Has Been Wearing “Staud” Brand All Summer

Arjun Kapoor plegdes his support in fight against coronavirus, donates to PM-CARES...