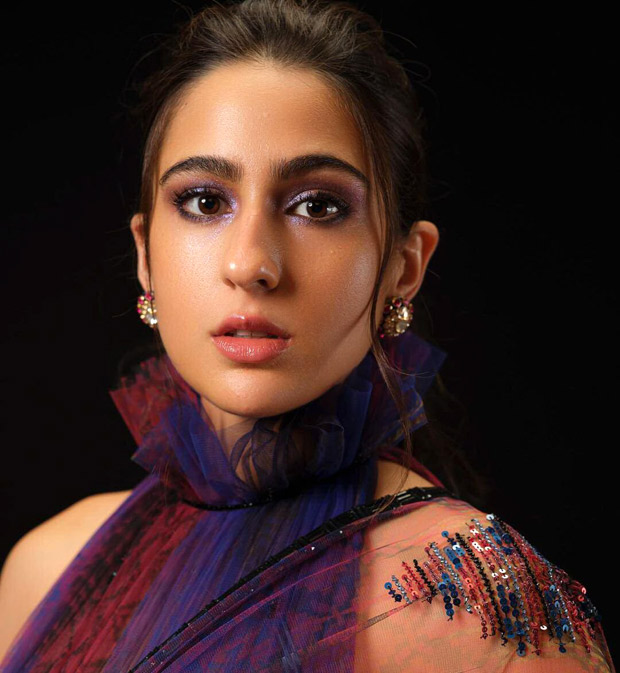 Bollywood actress Sara Ali Khan is the one who never fails to lend the appeal of her beauty to whichever dress she comes up in, whether it is her trendy appearance or traditional, ethnic or casual. You won’t often be let down if you put your trust in Sara Ali Khan to pull off both elegant and ethnic styles. Sara demonstrated this on Monday when the actress recently shared a few images from her most recent picture shoot, and they are absolutely stunning.

Sara Ali Khan has a very strong ethnic game and her public appearances say it all. The love aaj kal actor recently played muse for ace designer Manish Malhotra and wore a stunning multi-coloured see-through saree. The blouse, which had a ruffled collar and halter neck design, was the focal point of the outfit. The saree is constructed of handmade acrylic and has a sequin border that runs the length of the saree. It also has scattered geometric sequin embroidery that gives the outfit a dazzling look. Sara chose simple jewellery, including diamond stud earrings.

Sara Ali Khan’s cocktail saree was complimented by purple smokey eye-shadow and nude lips. Her beauty options included mascara-laden lashes, arched brows, a bright complexion, and a lot of highlighter. She tied her hair into a ponytail, leaving only a few strands framing her face.

Meanwhile, Sara recently stunned the audience with her electrifying performance at the IIFA awards 2022 in Dubai. While on the film front, the actress was spotted shooting for ‘Gaslight’ with Vikrant Massey and has recently finished shooting for an untitled project next to Vicky Kaushal

Deepika Padukone will be a part of Shah Rukh Khan, Nayanthara starrer Jawan

Amrita Rao and RJ Anmol open up about their pregnancy struggle; reveal they lost a baby via surrogacy

Kareena Kapoor Khan, Jaideep Ahlawat and Vijay Varma to kick off Sujoy Ghosh’s The Devotion of Suspect X in Darjeeling

EXCLUSIVE: Ajay Devgn admits there was a phase...