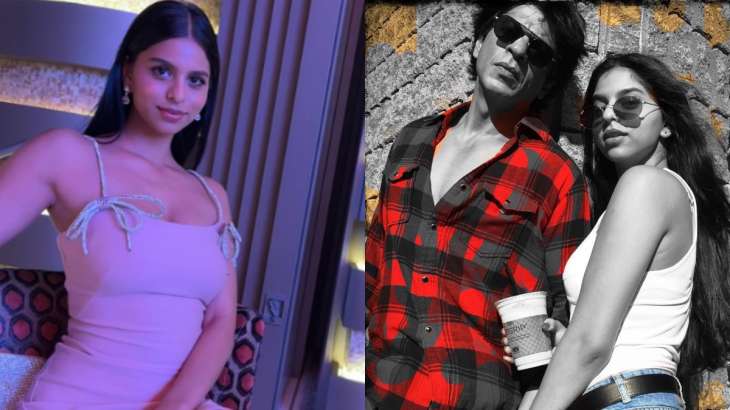 Shah Rukh Khan’s daughter Suhana Khan recently treated her fans with her elegant photos from an event she attended in Dubai. Shah Rukh Khan who is known for his wit and quirky responses, posted a hilarious comment on Suhana’s recent post.

On Monday, Suhana Khan took to Instagram and posted string of pictures. In the first picture, she can be seen in a halter-neck black gown. In another picture, she is seen with her mother Gauri Khan and friend Shanaya Kapoor. She is also seen donned in a light-pink dress. Sharing the pictures on her official social media account, she wrote Thankyou while tagging the respective people in the caption.

Reacting to the post, Shah Rukh Khan dropped a hilarious comment, he wrote, “Too elegant baby….so contrary to the pyjamas u wear around the house!!!” Reacting to this comment, Suhana replied “Thanks” with emojis. Simultaneously, Ananya Panday commented, “Pretty girl suzie,” while Shanaya Kapoor commented, “My suuuuuuuu.”

Fans also poured their love in the comments section. A fan commented, “Effortlessly elegant and beautiful,” “Fully speechless” wrote another.

On the work front, Suhana will be making her debut with Zoya Akhtar’s Netflix original The Archies alongside Amitabh Bachchan’s grandson Agstya Nanda, Boney Kapoor’s younger daughter Khushi Kapoor. Reportedly, the co-stars Agastya and Suhana have been dating for some time now. However, there is no confirmation from either party.

Shah Rukh Khan calls Ajay Devgn ‘strong and silent’ after letter sends him best wishes for Pathaan: ‘He has been a pillar of support and love to me and my family for years’

Jailer: This power packed glimpses of Rajinikanth from the Nelson Dilipkumar film...

Vijay Varma is sick of reading all the...