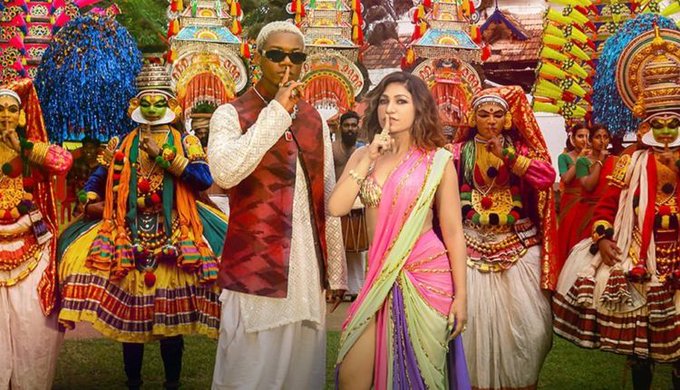 From ‘Hum Mar Jayenge’ to ‘O Saki Saki’, Indian singer Tulsi Kumar has made a name for herself with a long list of hit songs in her repertoire. Recently, she made headlines for her first international collaboration with Ghanaian hitmaker KiDi. Released under the banner of T-Series, their song ‘Shut Up’ was extensively shot in Kerala.

While music listeners are still praising their collaboration, the unseen BTS videos of the duo are constantly floating on the internet. In one of the latest videos, shared by the official Insta handle of T-Series, Tulsi can be seen poking fun at KiDi as he fails to name the Indian attire he is donning in the video.

In the video, Tulsi asks KiDi if he knows what he is wearing. KiDi tries to remember the name but in vain. Later, he asks a crew member to help him. However, Tulsi jokingly accuses him of cheating.

As the video progresses further, he tells the camera that he is wearing a Nehru Jacket along with a dhoti and a pair of Kolhapuri footwear. Then Tulsi says, “We have KiDi in our Indian avatar,” while KiDi adds, “I am looking fly”.

For the unversed, ‘Shut Up’, the music video, was released on December 17. Recently, the song achieved a milestone as it garnered 1M+ streams on Spotify.

Speaking of her collaboration, Tulsi Kumar had earlier said to Zoom digital, “It was an awesome experience. This festival happens every year and being the only female singer from the northeast in Bollywood, it feels good. Northeast listeners, as you know, are very good listeners and very talented people. So, I am very happy to perform there in front of these people. I absolutely enjoyed the night.”

She concluded by saying, “When I was asked to collaborate, I didn’t think twice. I knew it was going to be a very good opportunity, and people would love it. The whole experience was beautiful. When it comes to shooting the video, we chose South India, which is extremely rich in their culture, like their Kathakali and martial arts, so the richness of South Indian culture is evident throughout the song.”