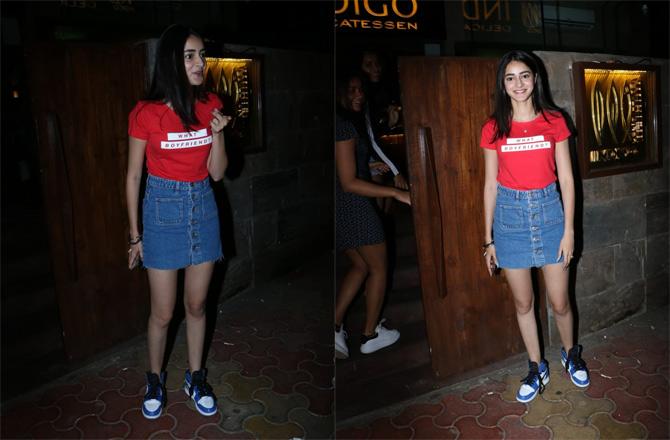 Ananya Panday is on cloud nine with the response she has received for her performance in Student of The Year 2. The actress celebrated this feat with her friends in Bandra, Mumbai

Ananya Panday caught the hearts of critics and audience through her performance in debut film, Student of The Year 2. She is basking in the success of this film, which managed to earn decent within a week at the Box Office. Ananya was paired alongside Tiger Shroff and Tara Sutaria, who is also a debutant. After slaying the role of Shreya with all the swag and sass, Ananya Panday has become a favourite amongst the youth. To celebrate the film’s success, Ananya Panday spent an evening with her friends at a popular Italian restaurant in Bandra, Mumbai.

Decked up in a red top and a denim skirt, teen sensation Ananya Panday looked cute as a button! Marking her debut with Student of The Year 2, the actress feels the character will always stay close to her heart. Her uber cool avatar in the film is giving goals to all young girls to fill-up their wardrobe with the new outfits. What’s interesting about the actress is, Ananya Panday who carried herself in vogue in the film winning hearts across quarters, also knows how to carry herself in great style and the pictures from the success party are total proof.

Being just one film old, Ananya Pandy is the youngest actress to endorse a popular beauty brand. Fans across the quarters have been extremely excited to witness the actress on the big screen and now that they have, she is the sensation all across.

While Ananya, the daughter of Chunky Panday was busy shooting Student of The Year 2, she already bagged her second project. The actress’ next film is with Kartik Aaryan and Bhumi Pednekar in the remake of the film, Pati Patni Aur Woh (1978).

Kunal Kemmu: Malang has a lot of shades to it

When will Priyanka Chopra Jonas have a baby? Here’s what she has to say