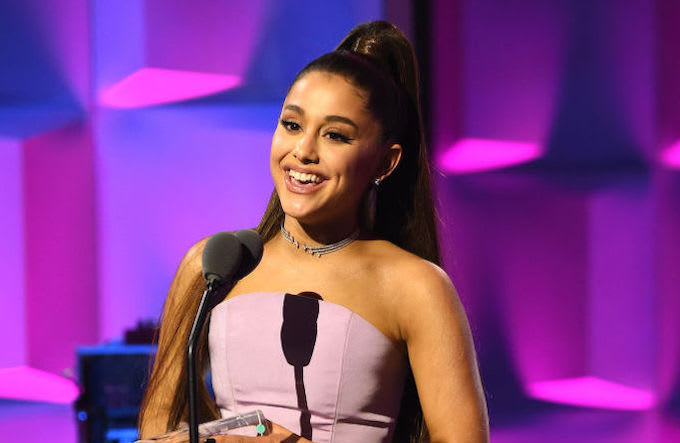 Ariana Grande performed a glitzy “7 Rings” at the 2019 Billboard Music Awards on Wednesday. The Thank U, Next single — cleverly interpolated with “My Favorite Things” from The Sound of Music — has spent the last 14 weeks on the charts.

Similar to her performance last year at the BBMAs—in which Grande surfaced from beneath the stage strewn across umbrellas—the pop singer was lifted onto the stage by a graffitied car. “Rather be tied up with calls and not strings/
Write my own checks like I write what I sing,” she belted, surrounded by her backup dancers basked in pink fluorescent lights.

A sea of screaming arianators sang every word along with Grande, gleefully chanting “I see it, I like it, I want it, I got it” over and over. (Unlike last year, Shawn Mendes, Taylor Swift and Camila Cabello were not seen dancing and mouthing the lyrics in their seats.)

Grande also performed “Be Alright,” which aired exclusively online via T-Mobile. Three years later, the Dangerous Woman track still holds up, as Grande pranced around the stage in her thigh-high white boots, signature ponytail swinging side to side.

Taylor Swift Released a Line of “ME!” Merch

Botox Or Bad Make-up? Kiara Advani Gets Trolled Over Her Latest Picture From Global Spa Awards

Kiara Advani and Sidharth Malhotra dismiss break up rumours as they pose...