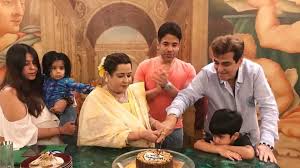 Veteran actor Jeetendra turned 78 yesterday. The country is under a 3-week lock-down, and the party was not as huge as it would be, otherwise. However, son Tusshar Kapoor and daughter Ekta Kapoor did the best they could, and a homely celebration took place.

We later came across a video shared by Ekta on Instagram. Carrying son Ravie in her arms, she sings the Happy Birthday song as Jeetendra, accompanied by Tusshar’s son Lakshya, cuts the cake. “Happy bday papa. A quite bday but special one,” Ekta wrote.

Lakshya was, in fact, very excited that a party was going to be hosted in the house. Earlier on yesterday, Tusshar gave us a sneak peek into how he was cheerfully prepping the floor, showing us the arrangements of the party. “Grandson wants to prep the floor himself for his granddad’s birthday cake cutting! #selfisolate #selfmotivate #selfserve #stayhome #staysafe,” Tusshar wrote.

Not bad for a quarantined birthday, right? Here’s hoping next year’s bash will be bigger and better.

Did you know? Rohit Shetty was Akshay Kumar’s body-double for THIS film