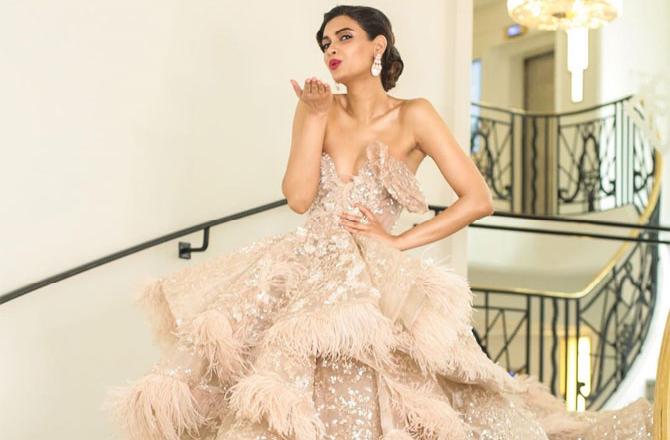 Cannes: Cocktail actress Diana Penty, who made her Cannes red carpet debut this year, was dressed to kill! Diana Penty made her Cannes Film Festival debut count by walking the red carpet in an outfit that can be simply put as breathtaking. Penty brought her fashion A-game to the 72 Cannes Film Festival by opting for a Nedo by Nedret Taciroglu couture extravagant beige coloured off-shoulder gown and de Grisogono jewellery. Keeping it summery and breezy, Diana detailed it with faux feathers to add volume. With her hair neatly tied in a bun, the actor kept it subtle and light with a fresh face of makeup complimenting her dress. Her bold red lips added the perfect amount of oomph to the overall look.

She even posted the pictures of her red carpet look on her Instagram account and wrote: “Go big or go home! #Cannes2019 #DianaAtCannes #GreyGooseLife #LiveVictoriously #FauxFeather

While this was her first red carpet appearance, it was not the first Cannes related event that she attended. Diana earlier attended the Chopard Love event dressed in her Celia Kritharioti’s golden sequin outfit. Needless to say, she looked drop dead gorgeous. The Bollywood diva rounded off her look with statement earrings.

Diana turned up at the party looking absolutely stunning in a black couture gown by Celia Kritharioti. On the right shoulder of her dress was a light peach coloured oversized bow which covered the length of the dress.

Anil Kapoor: My role in Malang has shades of grey

4 Years Of Kapoor & Sons: Sidharth Malhotra shares a heartwarming video from behind the scenes

Ananya Panday shares a story related to her...