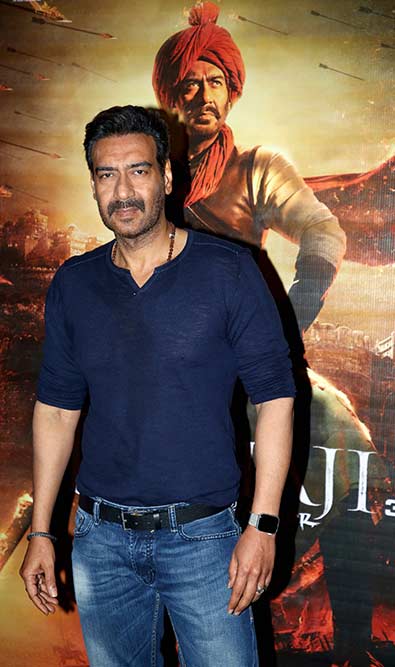 Everyone has high expectations from Ajay Devgn’s upcoming period drama, Tanhaji: The Unsung Warrior, which releases on January 10, 2020. The film is based on the life of Tanaji Malusare, who was the military leader of Chhatrapati Shivaji Maharaj. Tanhaji: The Unsung Warrior boasts a big ensemble cast, which includes Saif Ali Khan, Sharad Kelkar, Kajol, and Jagapathi Babu. While Ajay plays the titular role, Kajol will essay the role of his wife Savitribai. On the other hand, Saif Ali Khan plays the antagonist whereas Sharad Kelkar will be seen as Chhatrapati Shivaji Maharaj. The Om Raut directorial is already receiving good responses from the masses owing to the film’s two fantastic trailers and songs.

Tanhaji: The Unsung Warrior will be released in the 3D format as well and Ajay Devgn has just revealed the reason. In an interview with PTI, he said, “Besides the storyline, I am always inclined to create new things like when I wanted to make this film we worked on 3D and technology in a way that it should look new. Visually we are very happy with the film.”

Apart from revealing that, Ajay added that the film is going to be informative for the audience. “Apart from the film being grand and carrying a message, it is also educative, it is informative. It is an interesting story to watch and such combination is rare,” he said.

Further, when asked about the person who came up with an idea to make a film on the Maratha warrior, Ajay Devgn revealed the person was Om Raut (director). “When he narrated me the idea I liked it very much. In schools, there was just one part about him in textbooks. It is amazing how people like him sacrificed their lives. Even if the story was fictional it has that kind of power to excite you – it has heroism, drama, emotions. There are so many such heroes, who have sacrificed their lives for the country,” said Ajay.

John Abraham: I have had a holiday for only five days in the last eighteen years