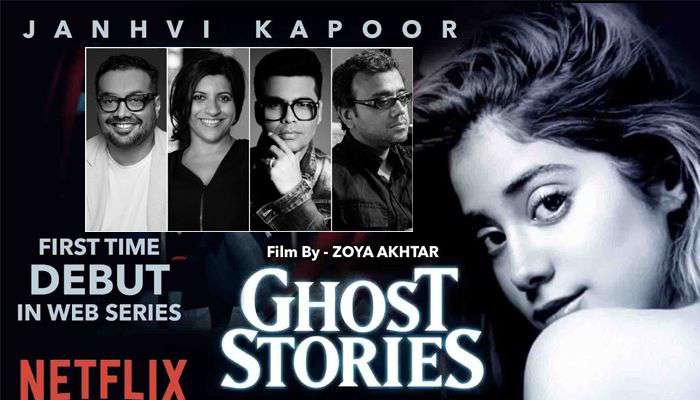 Filmmakers Karan Johar, Zoya Akhtar, Dibakar Banerjee and Anurag Kashyap want everyone to start their new year with a scream as Ghost Stories will go live on Netflix on January 1, 2020.

The filmmakers also teased the story-line of their much-anticipated project, which is being dubbed as an edge-of-the-seat psychological drama, while announcing the release date via a video.

The video starts with Kashyap saying “last year we did Lust Stories and we had so much fun”. To which, Karan added: “You all saw that and enjoyed, and we decided to go one step further. Something that has changed things for all of us.”

“We ventured into a space that none had been in before. I really liked making the film,” Zoya said. Dibakar explained the premise of the project by saying “it is about things that are not really human”.

They went on to give hints about the plot. “I don’t think I can ever look at big fat weddings the same way again,” Karan said. “Innocent kindergarten rhymes are sending me running,” Zoya exclaimed, while Anurag said: “Bird songs don’t sound sweet anymore.”

“Strange fascination and craving for certain kind of food,” Dibakar added. “So Netflix is going to put this out at midnight 12 am on January 1, bringing your new year with a scream,” Karan said.

Check out your horoscope for today!!

Check out what Richa Chadha has to say on fulfilling her wish list!!!

Exclusive! Nora Fatehi on birthday plans: I don’t have any time off so I’ll be working on my birthday, which I heard is a blessing

Watch: Ayushmann Khurrana sings Roobaroo as he lights candles with his kids

THESE pictures of Sara Ali Khan prove that...