Priyanka Chopra and Sam Heughan’s upcoming film It’s All Coming Back To Me is all set to release in the theatres on February 10, 2023. Priyanka took to her social media handle to share the first look of the film and also announced the new title and release date of the film. The film was formerly titled Text For You.

Priyanka Chopra and Sam Heughan’s Text For You now titled It’s All Coming Back to Me; to release on February 10

Sam Heughan, too, took to his social media handle to share the first look and wrote, “It’s all coming back to me. Premieres Feb 10th!With the brilliant @priyankachopra and the one and only @celinedion.”

In the poster, Priyanka and Sam are seen hugging each other while standing on the street with wide smiles on their faces.

Meanwhile, Priyanka was last seen in the Hollywood film Matrix Resurrections alongside Keanu Reeves, Carrie-Anne Moss, and Jada Pinkett Smith. She will also be seen in Russo Brothers’ Citadel.

On the Bollywood front, Priyanka was last seen in the film The Sky Is Pink. She will soon start shooting for Farhan Akhtar’s directorial Jee Le Zara. The film also stars Katrina Kaif and Alia Bhatt.

On the personal front, Priyanka and her husband Nick Jonas turned parents earlier this year when they welcomed their baby girl via surrogacy. “We are overjoyed to confirm that we have welcomed a baby via surrogate. We respectfully ask for your privacy during this special time as we focus on our family. Thank you so much,” a joint statement by the couple read. 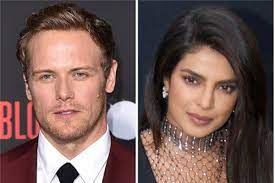 10 Years of Hate Story Throwback: “Usually in our films, it’s the male who has more inhibitions about stripping, kissing and love-making. There’s too much performance anxiety in the male” – Vivek Agnihotri