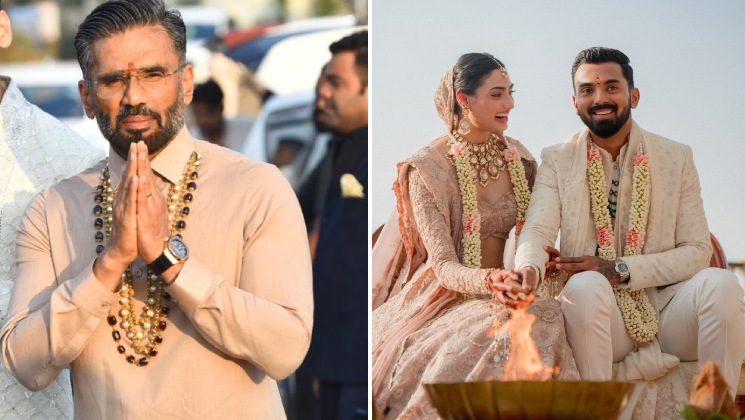 The week kicked off with celebrations in B-town as popular star Suniel Shetty assumed a new role of father-in-law. His daughter and Hero actress Athiya Shetty tied the knot with her long-time boyfriend and renowned cricket player K. L. Rahul in an intimate ceremony in Khandala. Despite it being a private affair, the couple and the Shetty family arrived to interact with the media post the wedding ceremony. And now the proud father has taken to social media, to share a heartfelt note about his daughter’s wedding.

In a recent post shared by Suniel Shetty, he also dropped some fatherly advice for his daughter about love and marriage saying, “A hand to hold and a reason to believe because sometimes the right place is a person and the ingredients love and trust … congratulations and Godbless my bachchas”. He posted it along with a photo of Athiya Shetty and K. L. Rahul taking ‘pheras’ at their wedding.

Suniel Shetty had also expressed his happiness when he interacted with the media post the wedding in which he had said, “It was beautiful. It was very small, with just close family lekin sab bahut acche se hua (everything went well), adding, “Shaadi hogayi hai, father-in-law ban gaya hoon officially. Beta ghar aaya hai ((The wedding was completed and I am officially a father-in-law). We are welcoming a son at home). He continued talking about his role, “I am a father, and don’t want to get involved in the in-law complications. I ace the role of a parent, and I want to do that.”

Athiya Shetty and K. L. Rahul, who have been in a relationship for about three years, tied the knot in an intimate ceremony at the Khandala farmhouse owned by the Shetty family, on January 23.

When Karan Johar’s twins Yash and Roohi disapproved of his dancing skills!

Yo Yo Honey Singh reveals that he once purchased a car number...

Ali Fazal takes to wrestling as part of...